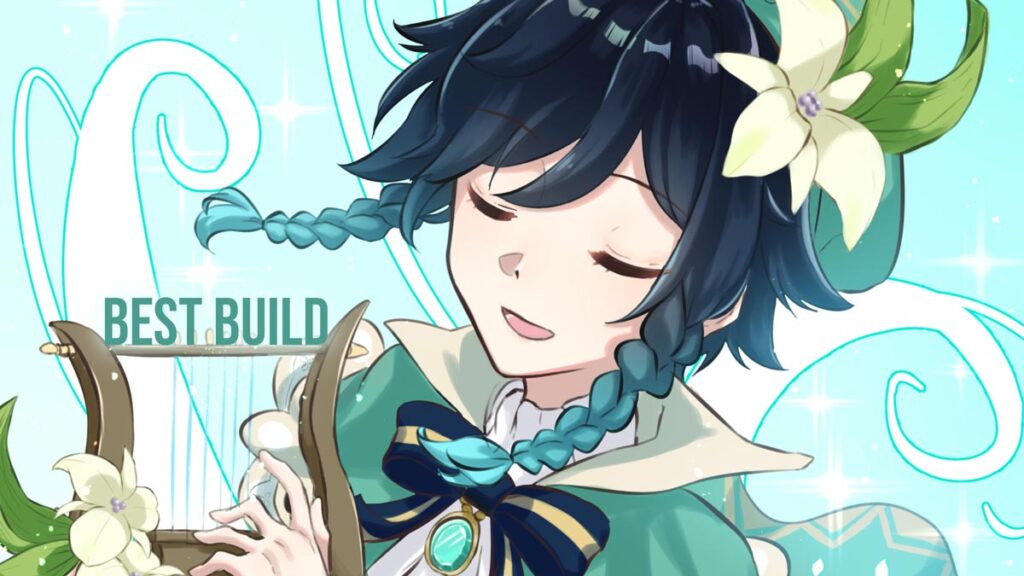 The first limited character and the Anemo archon, Venti is an Anemo bow user that is well known within the community as great support due to his swirl mechanic. Not only that, but his Elemental Skill is very helpful in exploration.

Venti’s Elemental Burst is still considered to many as one of the most broken abilities in the game. However, in order to fully utilize it, it is important to understand how it works and how his rotations go. Here you can learn how to optimize his build to reach his peak performance!

Venti attacks up to 6 times with ranged attacks. It can also be aimed and if it is fully charged, it will deal Anemo damage. This ability does not deal as much damage and it is not as useful as the others. Thus, this is the least priority skill to level.

Venti summons wind that will knock up the enemies and deal AoE Anemo damage. Holding this skill will summon the wind on Venti and Venti rides the wind flying higher. This Wind deals more Anemo damage and the radius increases.

Venti shoots an arrow that creates a stormeye that gathers enemies in the center and deals Anemo damage. The stormeye can absorb an element and deal damage with the same type of element multiple times. However, this absorption can only happen once.

This Burst cannot pull enemies who are more than 20 levels above Venti nor Elite bosses such as thunder manifestation. However, this skill is what makes Venti extremely useful against multiple enemies since it ensures most of them if not all are damaged. This is why it is the highest priority to level up.

One important thing to note is element priority. If the field encounters multiple elements, it will absorb the element with the highest priority. The priority order is Pyro, Hydro, Electro then Cryo respectively. This is important in setting up comps especially in fighting enemies with infused elements such as hydro abyss heralds.

Holding the Elemental Skill creates an air current that can be used for gliding.

Skyward harp can be great for Venti since it gives 22.1% crit rate, allowing Venti to crit more and deal more damage. Not only that, this bow gives 20-40% crit damage to boost his damage even further.

Elemental mastery is the best stat to build on Venti especially due to his swirl reaction. This bow provides 165 elemental mastery while increasing the Elemental Skill and Burst’s damage by 24-48%.

In terms of stats, the most important of them all is elemental mastery to make his swirl damage stronger. Focusing on his swirl is the most important, then Viridescent venerer is the best set for him. This is mainly because increases Anemo damage and swirl damage. Not only that, it decreases the elemental resistance of the element infused in his swirl. Other than that, energy recharge and atk% are important to increase.

In case Viridescent venerer is not an available option, Noblesse oblige is a good alternative to boost Kazuha. The four-pieces bonus increases the attack by 20% upon using his Elemental Burst.

Venti can practically work in any comp since he is an amplifier for any reaction. His swirl mechanism allows him to be paired with any two that can react to make their combination even better. He can be paired with Freeze, Melt, and Evaporate comps.

Both Ganyu and Ayaka are Cryo damage dealers that can be used for both Freeze and Melt comps. Absorbing the Hydro element from the support, Venti will allow Ganyu and Ayaka to permanently freeze their enemies.

As for the Melt comp, Any Pyro support can deal tons of damage when Venti can absorb their Pyro.

As the strongest Pyro user, Hu Tao can be paired well with Venti to make her damage on another level. Whether it is in a Melt or Vaporize comp, Hu Tao can benefit greatly from the reapplied element since her Elemental Skill makes her normal attacks deal Pyro damage.

Xiangling can do great with Venti to absorb Pyro by his Elemental Burst.

Not only that, pairing it with Guoba and Xiangling’s Burst will constantly reapply Pyro many times.

However, it is important to note that Guoba is not pulled by Venti’s Elemental Burst, so you have to position him properly for Pyro to be absorbed.

Bennett, being the most versatile support, can work greatly with Venti as well due to his heal, attack buff, and Pyro application. Since he applies Pyro to allies, it’s easier to infuse Pyro in Venti’s swirl to ensure Venti can optimally use his Swirl in the elemental reaction.

In terms of Hydro application for Venti, Mona can do wonders due to her Elemental Skill and Burst. By placing her taunt in the center, she helps attract and keep enemies within Vent’s field. Meanwhile, her burst can be absorbed easily by Venti’s Elemental Burst to be used by Melt and Vaporize reaction comps.

In terms of constellations, Venti does not require constellations to perform well in any comp. Venti does not require much investment to shine greatly overall and C0 is perfectly enough. However, if further damage is desired, it will require a lot of investment in him. This is mainly because the extra damage lies in C3 and C6, which will require you to spend a lot of primogems to achieve.

Since his release in version 1.1, Venti held a special place as a broken support due to how amazing his kit is. While he is being power creeped currently due to newer enemies, he still work wonders in stages with multiple enemies. Even for enemies that cannot be pulled, his swirl damage is more than enough to compensate.

Overall, Venti is a wonderful support that can work in a variety of comps. He can work as an element reapplier which can keep constant reactions, while being very useful in exploration due to his Elemental Skill.