Kujou Sara is an Electro bow user who is mainly a support. While she is… 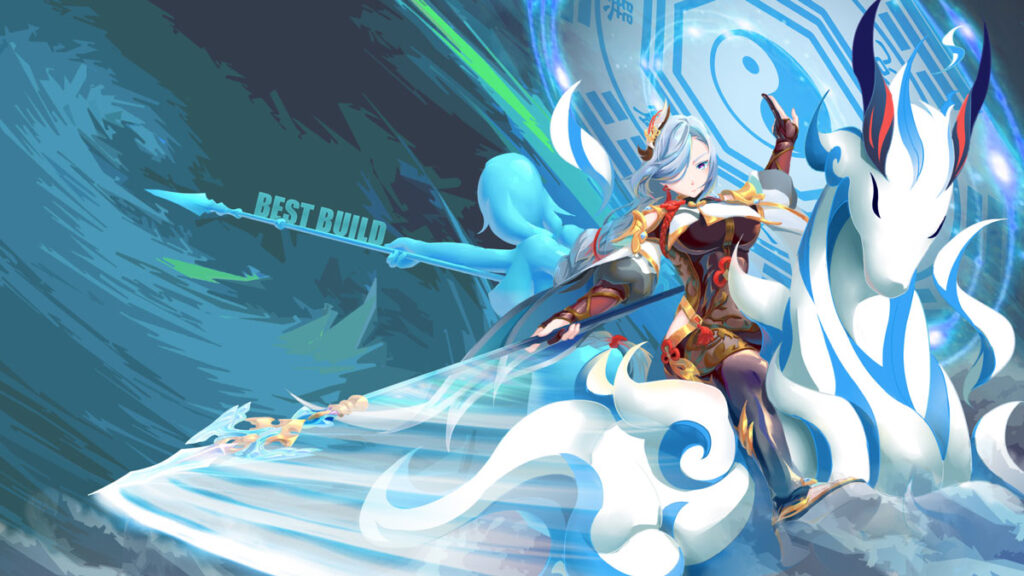 Shenhe is a Cryo polearm user that excels in buffing Physical and Cryo DPSs. Her Elemental Skill and Burst buff the allies while reducing enemies’ Physical and Cryo resistances. This makes her a fairly versatile support and more open to changes.

While Shenhe is a great support, managing her buffs is very important to not waste the offensive buff from her Elemental Skill. Understanding her mechanics is important to properly build her and use her in rotations. Here you can learn how to optimize her build to reach her peak performance!

Shenhe strikes up to five times and holding the attack lunges and deals damage to enemies along its path. Shenhe does not use this attack often in rotations, so it is the least priority in leveling up.

Upon using the Elemental Skill whether on pressing or holding, it grants “Icy Quill” buff. This buff will consume a stack and increases the damage or attacks that deal Cryo damage based on Shenhe’s current attack. Each Cryo hit will consume one Icy Quill stack, where pressing the Skill will grant 5 stacks of Icy Quills and holding will grand 7.

Pressing the Elemental Skill rushes forward and deals Cryo damage on her path. Holding the Skill deals AOE Cryo damage instead. Note that hitting multiple opponents will not consume one stack but based on the number of hits. The offensive buff from this Skill is the main source of support for her, making this skill the highest priority in leveling up.

Using the Elemental Burst creates a field where the talisman spirit will roam and deal AOE Cryo damage. The spirit also reduces the Physical and Cryo resistances of the enemies within the field.

Pressing the Elemental Skill will grant nearby allies 15% Elemental Skil and Burst damage for 10 seconds. Meanwhile, holding it will increase normal, charged, and plunging attacks damage by 15% for 15 seconds.

From a damage stand point, Calamity queller outshines every polearm weapon on Shenhe. While its secondary stat does not give high attack as other polearms, the passive grants up to 19.2-38.4% attack after using the Elemental Skill. This bonus doubles when the user is off-field.

This increase will raise the Icy Quill buff to another level all while giving an additional 12-24% elemental damage bonus. Overall, Calamity queller at first refinement can outdamage all polearms at fifth refinement.

Staff of homa is second only to Calamity queller. Given that it can work for almost all polearm users, it can be used on Shenhe to increase her damage all while making her a bit harder to kill. Moreover, the higher crit damage can compensate for some of the lost damage especially if Shenhe is used as a sub DPS.

The highest overall atk% on a four-star polearm. Lithic spear is a good alternative for those who do not own five-star polearms. While it ties with the Royal spear in the second stat, the passive outweighs the Royal spear one where it gives 7% attack and 3% crit rate per Liyue characters in the party. Shenhe is from Liyue so in some comps it is possible to reach the maximum 24% attack and 12% crit rate.

Unfortunately, currently there is no 4-piece set that works perfectly with Shenhe. However, the most important stat for Shenhe is attack, so pairing her with two pieces of Gladiator’s finale and Shimenawa’s reminiscence can work perfectly well with her due to the 36% attack buff.

Another option that achieves similar results is Noblesse Oblige if she is used as a support or sub DPS due to the 20% attack boost to all party members. However, it is only possible to give her Noblesse if other members do not use it.

In terms of substats, achieving as much attack as possible is the most priority. Shenhe’s Elemental Burst has a high cost, so energy recharge is also needed. This allows Shenhe to be easier to build since she only requires two stats. However, if she is used as a sub-DPS or a secondary damage dealer, she will also require cryo damage bonus and crit rate/damage.

Shenhe excels as a support for Cryo and Physical support. Thus, her team comps revolve around either Physical damage or Cryo damage. The other two members are there to either buff them or apply elemental reactions. An example for buffers would be Bennett and Yun Jin for Physical.

Meanwhile, Shenhe’s Cryo can be used for either permafreeze comps or superconduct for Physical comps. Her Elemental Burst applies Cryo multiple times while it is active, making reactions easier especially with another Anemo user absorbing the second element.

Ayaka’s and Shenhe’s kits synergize so well since Shenhe can apply her buffs, Ayaka swaps in and use all her skills and swap to Shenhe again to deal more damage. Those two work together so well as two DPSs while doing damage on-field or off-field. If Shenhe is built as support, Ayaka’s element infusion can compensate for that as well. This comp tends to work best against bosses.

Shenhe can turn Ganyu’s aimed shot into a nuke. Their Elemental Bursts are both fields and can be placed on top of each other. Adding a Hydro user will make their field a death trap where enemies are permafrozen. Not only that, Ganyu’s Skill will attract them to the field by taunting them. This comp works better for fighting multiple smaller enemies.

If Shenhe is used for Elemental reactions, having an Anemo user is definitely beneficial where the second element is applied by the swirl while the Cryo is applied by her Elemental Burst. Also, Anemo Bursts gather enemies in the center, which ensures majority of enemies, if not all, are affected by Shenhe’s Physical and Cryo resistance decrease.

Pairing Bennett with Shenhe can be a great support to Cryo and Physical DPSs. Buffing DPSs and healing them while weakening enemies will make even the hardest stages a lot easier. However, beware of his Pyro application if you are running permafreeze comps.

While Kokomi lacks the offensive buff of Bennett. Her heals are massive along with applying Hydro to enemies to ensure enemies are permafrozen. Not only that, she can deal a lot of damage through ocean-hued artifact set.

In terms of constellation, Shenhe is can do perfectly fine without constellation. Her Burst debuff and Icy Quills buff make her a wonderful support on their own. If further damage is desired, the most optimal constellation depends on whether she is used as Cryo or Physical support.

The second constellation is amazing for Cryo support since the extension alone can increase the damage window and makes the Burst almost permanently up, since the Burst cooldown is 20 seconds and with the constellation its duration is 18 seconds.

Shenhe is a wonderful support who can both help Physical and Cryo DPSs. By buffing her allies and reducing her enemies’ resistances, she can be extremely useful in clearing higher difficulty stages such as abyss.

Overall, Shenhe is a great investment since she is more versatile in team comps. Her support potential is very high while not requiring many substats. Meanwhile, she can be used both against multiple enemies and solo bosses if in the right comp.