Anime is a vast entertainment genre where almost everything goes. Superpowers? Check. Getting teleported to… 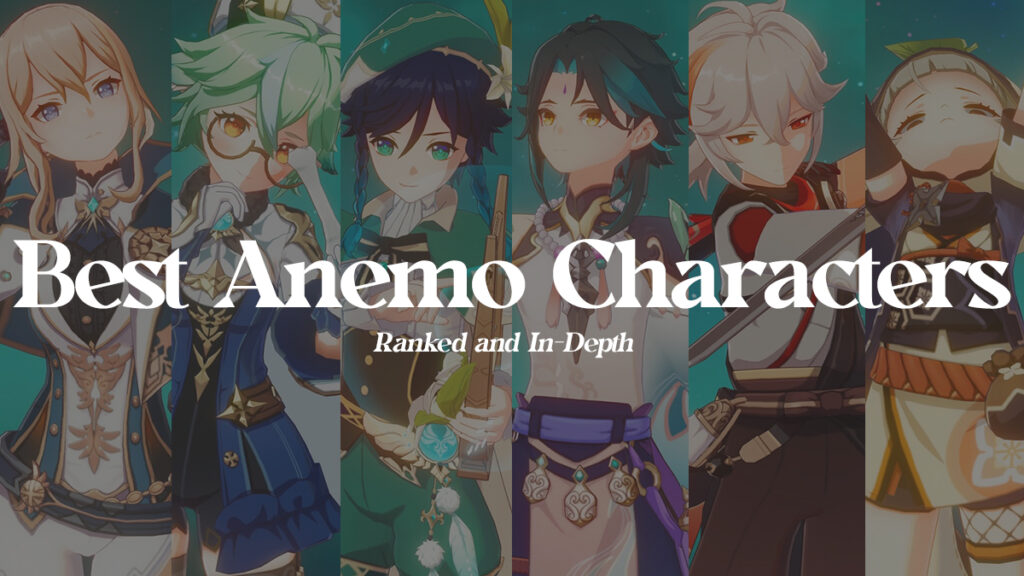 By MarisUpdated:April 24, 2022No Comments9 Mins Read

Anemo is one of the first elements to be introduced in the game, as it was the first element to be acquired by the Traveler. Anemo is best known for triggering elemental reactions through Swirl, which deals elemental damage of the involved element while spreading the element out. This causes more enemies to be affected by the element. Anemo is also known for its crowd control abilities, where enemies can be pulled altogether to make attacks easier or knocked back to avoid being inflicted damage.

There are currently 6 Anemo characters in the game (excluding the Traveler), with only two four-stars and the rest being five-stars. The best Anemo characters all have abilities that will help your party in various ways, whether through crowd control, healing, support, or damage.

Meet Sayu, a cute Inazuma ninja who likes to sleep at every second she can get. Don’t underestimate her though, she can pull off a lot of skills with her eyes closed. If you hold her elemental skill Yoohoo Art: Fuuin Dash, she rolls into a ball and dashes while dealing Anemo DMG and triggering Swirl. After holding her skill, you can control the direction of her dash and choose when to stop dashing. This skill has a maximum duration of 10 seconds, and the longer she uses it, the longer its cooldown. In her burst Mujina Flurry, Sayu summons a Daruma that heals party members. The amount of HP restored scales off her ATK. If there are nearby opponents and no party member has HP below 70%, the Daruma deals Anemo DMG.

Sayu’s utility passive is an absolute help to those gathering Crystalflies for their Condensed Resins. As long as Sayu is in the party, your characters won’t startle Crystalflies and other animals. At Ascension 4, the Daruma in Sayu’s burst has increased healing abilities. When healing a certain character, other nearby characters will also have their HP restored for 20% of the first character’s HP.

Constellations to look out for are C1 and C4. Sayu’s Daruma has lots of HP restrictions, but C1 Sayu ignores these, causing the Daruma to heal and attack at the same time. C4 is great if you built her as burst support, as Sayu recovers 1.2 Energy every time she triggers a Swirl reaction. This can occur once every 2 seconds.

Also Read: Best Healers in Genshin Impact. (more information regarding Sayu and other healers’ healing abilities can be read here)

If you don’t have Venti, Sucrose is a great alternative for crowd control. This alchemist from Mondstadt is the sole Anemo catalyst user. Her elemental skill Astable Anemohypostasis Creation – 6308 creates a Wind Spirit that pulls opponents in altogether, then launches them back while dealing Anemo DMG. Her burst Forbidden Creation – Isomer 75 / Type II creates a larger Wind Spirit that has the same abilities, except it triggers a Swirl reaction when it comes into contact with other elements and deals additional elemental DMG. Elemental Absorption may also occur.

Players who do damage showcases usually have Sucrose in their party because she’s a great support that buffs the party members’ Elemental Mastery by A LOT. At Ascension 1, when Sucrose triggers a Swirl reaction with a certain element, characters possessing that same element have their EM increased by 50 for 8 seconds. And at Ascension 4, when Sucrose’s skill or burst hits an opponent, all characters’ EM is increased by 20% of Sucrose’s EM for 8 seconds as well. Her utility passive is helpful too. When you use Sucrose while crafting character and weapon enhancement materials, there’s a 10% chance to obtain the product twice.

All of Sucrose’s cons benefit her support skills. C1 grants her elemental skill another charge, resulting to 3 total charges. C2 increases the duration of her burst by 2 seconds. Of course, save the best for last. At C6, if her burst triggers an Elemental Absorption (which can be triggered through Swirl), all party members gain a 20% Elemental DMG Bonus based on the Wind Spirit’s currently absorbed element.

Jean is an all-rounder: she can heal, she can be a crowd control support, she can be a main DPS, whether physical or elemental. Jean’s Gale Blade can pull in opponents for a short period of time if you hold the elemental skill. She launches them afterwards, dealing a large amount of Anemo DMG. If you just tap the skill, she releases a mini-storm and instantly launches enemies away. Meanwhile her burst Dandelion Breeze creates a dandelion field that heals any character inside the circle, while also launching surrounding opponents and dealing Anemo DMG. The amount of HP restored is based on her ATK.

Jean’s C1 and C2 is something to take note of. C1 increases the pulling speed of Gale Blade after holding the skill for more than 1 second. Its damage is also increased by 40%. Meanwhile C2 increases all party members’ movement and attack speed by 15% every time Jean picks up an Elemental Particle or Orb. The speed buff lasts for 15 seconds.

One of the best Anemo characters, Kazuha is the first to be announced from Inazuma, before the Inazuma patch was even released. Kazuha is a sword user, and his elemental skill Chihayaburu lifts him into the air while pulling opponents into his position. After casting his skill and plunging, his Plunging Attack DMG will be converted into Anemo DMG. Holding this skill can unleash greater Anemo DMG over a larger AoE. Kazuha shines in his burst Kazuha Slash. He creates a slash that deals large AoE Anemo DMG and afterwards an Autumn Whirlwind, wherein it comes into contact with different elements and deals additional elemental damage of that type. Elemental Absorption occurs once every use.

Kazuha’s utility passive decreases sprinting stamina consumption by 20%. At Ascension 4, Kazuha gives his party members an additional 0.04% Elemental DMG Bonus to the element absorbed by Swirl for every point of his EM. This lasts for 8 seconds.

Constellations: C1 is a great bonus for Kazuha. His skill’s cooldown is 9 seconds, but this constellation decreases it by 10%. Plus, using Kazuha Slash resets the skill’s cooldown. Another good constellation is C2. The Autumn Whirlwind from Kazuha’s burst increases his EM by 200, as well as the characters within the field.

This adeptus from Liyue works well as a main DPS. His kit is quite easy to understand too. Xiao’s elemental skill Lemniscatic Wind Cycling has two charges that deal Anemo DMG, which can be used even in mid-air. You can unleash big Anemo damage in his burst Bane of All Evil. Xiao wears his Yaksha mask and all his attack DMG are converted to Anemo DMG. His jumping abilities are also increased greatly, allowing him to easily plunge and deal Plunging Attack DMG. While using his burst, Xiao’s HP is drained continuously.

Xiao’s utility passive decreases your characters’ climbing stamina consumption by 20%. His Ascension 1 passive is the reason why you should prioritize leveling up his burst first. When using his burst, all of Xiao’s DMG is increased by 5%. It increases by 5% more every 3 seconds while the ability lasts. The maximum DMG bonus is 25%.

If Xiao gets a rerun again, you can opt at least for C1, which gives his skill one additional charge. C2 Xiao’s Energy Recharge is increased by 25% when he is in the party but not on the field. And you don’t have to worry about dodging when you have him at C4. Xiao gains a 100% DEF Bonus when his HP lowers to 50%.

Of course the best Anemo character in this list is the Anemo archon himself. Being the very first five-star character in the game to be featured in the rate-up Event Wish banner, Venti’s crowd control abilities are a blessing from the gods (wink wink) and it’s no wonder why his rerun banner earned a lot of sales. But let’s dig into his elemental skill first. Skyward Sonnet launches opponents into the air with a Wind Domain and deals Anemo DMG.

If you hold this skill, it summons an even larger Wind Domain which deals AoE Anemo DMG. Venti’s burst Wind’s Grand Ode is his trademark. After firing an arrow, Venti creates a huge Stormeye that constantly deals Anemo DMG while sucking in opponents. If other elements come into contact with this Stormeye, additional elemental DMG of the same type will be dealt. Elemental Absorption may also occur.

Venti’s utility passive decreases your characters’ gliding stamina consumption by 20%. At Ascension 1, holding Venti’s skill can create a mini wind current, which your characters can use for gliding. His Ascension 4 passive is a battery. 15 Energy is regenerated for Venti after his burst ends, and if an Elemental Absorption occurs, 15 Energy is also regenerated to all characters attaining the same element.

Notable constellations include C2 and C4. C2 Venti’s elemental skill decreases enemies’ Anemo RES and Physical RES by 12% for 10 seconds. C4 Venti receives a 25% Anemo DMG Bonus whenever he picks up an Elemental Orb or Particle. This bonus lasts for 10 seconds.

The best Anemo characters are all great at getting the job done, especially when it comes to crowd control. Anemo is the element that feels like home, the way the Traveler’s first region was Mondstadt, the city of the Anemo archon.